The proud history of our national organization

AAUW has more than 165,000 members and supporters in more than 1,000 branches across the United States, with this mission statement –AAUW advances equity for women and girls through advocacy, education, philanthropy and research.  AAUW members belong to a community that breaks through educational and economic barriers so that all women have a fair chance.

We have a long and proud history.

AAUW started 131 years ago in 1881, when Marion Talbot and Ellen Richards invited 15 other college graduates to a meeting in Boston on November 28.  These women who had defied society’s standards by getting a college degree, envisioned an organization where women college graduates could band together to open doors of higher education to other women and find wider opportunities to use their education.  It was formally organized in January of the following year with 65 graduates of eight colleges and universities.

It was always an activist organization.

In 1884, branches were admitted as local groups of the parent organization.  The first branch in Washington, D. C. immediately got to work and looked into sanitary conditions in DC schools and presented their findings to Congress.

The next year, AAUW did their first research project, surveying 1290 members to refute a Boston physician’s contention that higher education was bad for women’s health.  The results were published in Massachusetts.  Just recently an archivist in our national office found that original study.

In 1888, AAUW awarded its first fellowship.

In 1913, they looked at pay equity and published a report on civil services job classification and compensation.

In 1917 they gave the first international fellowship.

In 1918, they supported women’s suffrage.

In 1921 public education became a priority for all branches – working for adequate support, better standards and educating the public about school needs.

In 1946, after advocating for the UN, AAUW received permanent observer status there, and we still have a member there as an observer.

In 1955 they organized a Fellowship Foundation to raise money for fellowships – it is now one of the world’s largest sources of funding for women seeking advanced degrees.  This year it provided more than 4.3 million dollars in fellowships and grants.

Also in 1955, AAUW supported the first federal legislative proposal for pay equity in a year when a woman working full time, year round made an average of 65 cents for every dollar earned by a man.

In 1964 they supported the Civil Rights Act and the Voting Rights act.

In1972, they were instrumental in passing Title IX.  Patsy Mink, the co-author, was an AAUW member.  It provides for equal treatment for women in both athletics and academics.  You will recall that at the Olympics this year more women won medals than men.  That is the result of gains made under Title IX.

In 1981, we started our Legal Advocacy Fund to support women in colleges and universities seeking judicial redress for sex discrimination.  It has since been expanded to support victims of workplace discrimination in general, not just on campuses.

Most recently AAUW led the efforts to pass the Lily Ledbetter pay equity act, the first act signed by President Obama after taking office, and we continue to press for the Paycheck Fairness Act.  Women still make only 77 cents for every dollar made by a man – not much progress in more than 50 years since 1955 when the figure was 65 cents.  And black and Hispanic women fare even worse, earning 64 cents and 55 cents respectively, according to the latest census data, just released last week.  The paycheck Fairness Act would deter wage discrimination by closing loopholes in the Equal Pay Act and barring retaliation against workers who disclose their own wages to coworkers.  Without this bill employers can penalize and even fire employees for talking about their salaries.  This egregious practice leaves workers in the dark, preventing them from ever finding out about pay discrimination in the workplace.  Women need this legislation to get the pay they deserve

And what we have done in our Venice branch

Our local Venice branch was organized in 1975 with 60 charter members.  We have supported all national programs, as well as local efforts for women and girls.  We raised money to endow a career development grant in the name of Frances T. Bourne, one of our members, for which the Jacaranda Library was named.  She worked tirelessly to get that library built for south county residents.  We have staffed, along with the Sarasota Branch, Academic Olympics in Sarasota County for many years. We have given scholarships for many women whose education was interrupted and were returning to complete their degrees.  Our Home Tour, our biggest fundraiser has raised thousands of dollars for this cause. We have organized a STEM workshop for 5th grade girls and we are working with the Jacaranda Library on another STEM project.  We have more than 240 members and we are the largest branch in Florida.

A few of the highlights… 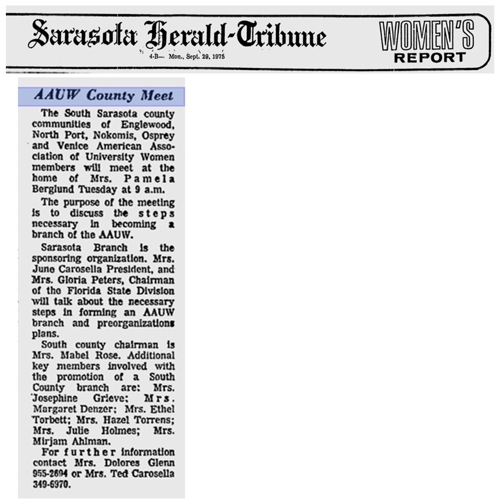